So I have been cleaning my house.

I called R. (my ex) and ask him to come get the rest of his stuff (yes, he did move out 3 years ago!!) and I asked him to tell his parents to come get their stuff. (yes, they did put stuff in our house for us to "temporarily" store 5 years ago!)

R. said I was acting like a B**** for not helping to carry out the king size bed and frame.
I told him I was supervising.

Somehow, he made me feel like the bad guy for wanting my space to be my space!


I am getting rid of things that should have been thrown away a long time ago. 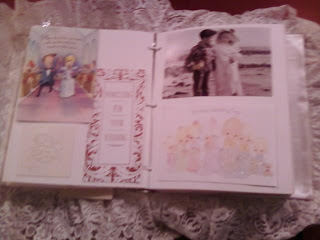 (an album of wedding cards)

When R. saw it, he said, "Don't throw that away!"
Yet, he didn't want it. I mean why would he? It was from our marriage...that failed!

Still, he wants me to hold on to it??? For what? So our kids can be reminded when they are older that their mom and dad were once in a church and lots of people came and gave us cards. Yeah...I don't think so.

I also gave him some pictures of his... some of which were of him and his old girlfriends. He thumbed through them and said, "Yeah. Those can be pitched." That pissed me off! I mean we dated for 3 years. We were married for 9 years! and all those years he just had to keep those pictures... but now??? Oh, no! Now they can just be pitched!

Email ThisBlogThis!Share to TwitterShare to FacebookShare to Pinterest
Labels: divorce, the ex