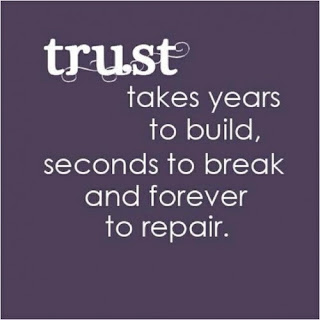 You see... I have this student that comes and checks in with me.  He does so because he is known for lying and stealing.  It's like his little daily "conscience" check before he starts his day.

At first, you could tell he didn't want to be gracing my doorway every morning... We talk about things that we do to prove people can trust us.  And at first I could see his eyes roll, even if he didn't physically do it, but I saw less reports of lying and no new reports of stealing... and I felt like we had a rapport.  I guess you could say that I was giving myself a virtual pat on the back for breaking ground with this kid.

Today, he got caught going through my desk drawers... which caused the realization to hit that the candy bar he "got" yesterday (that his mom emailed to see if I had given to him because he said it was from a friend) was FROM MY DRAWER! And then when I point-blank asked him about it, HE LIED!

I'm not gonna lie.
I trusted him.

Despite what everyone else told me... I like to give kids the benefit of the doubt (until they prove me wrong.)

And today... Today, he proved me wrong.
And it crushed me.

I guess I wanted to believe SO badly that I had made a difference and in one quick action, I felt as if I failed.
Funny though... How HE did the wrong action and yet *I* feel like I failed.

That's why people don't understand teaching sometimes... Because when our students fail, we view it as a poor reflection on us... Or at least I do.

Email ThisBlogThis!Share to TwitterShare to FacebookShare to Pinterest
Labels: teaching
Newer Posts Older Posts Home
Subscribe to: Posts (Atom)
I am a mom. I am divorced. I know this life has lots in store for me - I just don't always know what's around the next bend.