What the picture doesn't show

You see this picture? 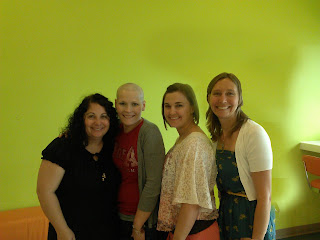 It is a picture of four friends.

What the picture doesn't show is... we have been through the gamut of life's trials and tribulations, the four of us... and none of them has stopped us... or got us down.

What the picture doesn't show is... our friend, Kelly, is fighting Stage 4 cancer.  Sure, her hair is gone... but otherwise, would you have known??

What the picture doesn't show is... She had to be on oxygen the whole time.  She was weak and frail when we saw her today.  Something that caught us all off guard... because she has ALWAYS been the strong vibrant one.

What the picture doesn't show is... the tears we are fighting... trying to look strong for Kelly... because we wanted our visit to be a happy memory for her.

What the picture doesn't show is... we are ending a tradition...we have cancelled our girls' weekend out because we don't want to have one without her.

What the picture doesn't show is... the confusion.  I've never dealt with something like this before.  Sure, I lost my mom to a car accident when I was 22... but to see one of MY friends, that is MY age dying...

What the picture doesn't show is... the pain and the fear and the sadness.  I don't know what to say or what to do... because imagining NOT having her as a friend is unimaginable...
Posted by Dawn at 10:49 PM 2 comments:

Email ThisBlogThis!Share to TwitterShare to FacebookShare to Pinterest
Labels: my peeps, with a tear in my eye 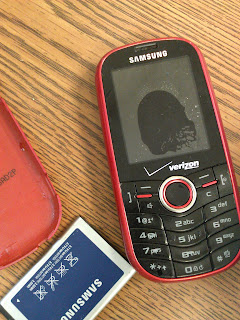 You see the liquid looking stuff swimming around in the inside??  Yeah... that would be cranberry juice.

Yesterday morning, I tossed my old cell on the passenger seat beside me. Normal every day occurrence.

I placed my morning cranberry juice in the cup holder. (What?! I'm a teacher. I don't pee all day... gotta keep the bladder infections away one way or another.)

I head down the curvy road to work.

Yeah... so I head around a curve and my cell phone slides across my seat and plunk into my juice it goes.

I seriously froze. I looked at my cell phone with bubbles coming up from it and I froze. All I could think was, "I'm in my cute white sundress ...and that cranberry juice it red ...and I don't want that on me... and I don't want have anything to dry it off with ...and OH MY GOSH!! MY PHONE!!"

I then pulled it out holding it above the cup juice dripping from it.  I couldn't believe that I had stopped to think about what I was going to do which made my phone more of a goner.

...but it forced me into a decision that I was dragging my feet on.
I purchased a "smart" phone almost 6 weeks ago.

My goal was to lower my payment... but I had technical difficulty and the company had to keep sending me new SIM cards.  After 4 attempts, I gave up on it. I carried around my "dumb" phone to make calls on and carried my new phone for all of the other cool features.

I guess you could say it allowed me to ease myself into it.

But yesterday... the "easing in" ended abruptly.

I'm still recovering from the undecided change, but I'm happy to report that my new phone pairs to my new car... so I won't be leaving it in my seat for it to find my cranberry juice.
Posted by Dawn at 12:49 PM No comments:

Email ThisBlogThis!Share to TwitterShare to FacebookShare to Pinterest
Labels: mishaps

Sometimes ignoring is the appropriate response

Let me just tell you... ignoring is not what I want to be doing right now.

Walking up to W. and shaking her and saying, "My child has finally gotten over the hurt you have put in his life!  Why must you come back for more??!!"

You see... 2 and a half years ago, R and his girlfriend at the time, W. broke up because she cheated on R.
Colby had grown very attached to her. Because we, as parents, didn't tell him why they were done (that is NOT a conversation you have with your 7 year old), it was hard for him to move forward.

He cried and had nightmares. My heart broke because there was nothing I could do to heal that pain.

Time does a wonderful job of healing it though... along with R. finding a wonderful woman who sees eye to eye with me.

And I thought we were done with that hurt... but W. started coming to the boys' ball games last week and she came again tonight.  She has moved next door to one of the boy's families that is on Colby's ball team. Her reason for coming??  To supposedly support her neighbor.  But what she is really doing is dragging my son back through past hurt.

We arrived home tonight and I got the boys ready for bed as usual.  It's normal for Colby to talk in his sleep.  Many a nights I stand at his door and listen to the "conversations" he has with his friends or with Sam.  But  tonight, it fell into a time that I thought we had moved past. Night terrors.

He thankfully woke up fairly quickly and I took him into my room with me.  But I know it has to do with her.  I know that he still can't process that pain.

I just wish she could see it and understand.
I just wish she that move on and stay out of the vicinity of my children... because if she really did care for them, I would hope that she would think of them instead of "supporting the neighbors".
I wish I could shake her and tell her to "Please just stop!!"
But instead... I will just ignore her and hope my son doesn't see her.
Posted by Dawn at 11:24 PM 1 comment:

Email ThisBlogThis!Share to TwitterShare to FacebookShare to Pinterest
Labels: Attitude is EVERYTHING, cRaZy sTuFf, parenting, the ex
Newer Posts Older Posts Home
Subscribe to: Posts (Atom)
I am a mom. I am divorced. I know this life has lots in store for me - I just don't always know what's around the next bend.