Trying to listen to that little voice

You know when you have a feeling... but you just can't put your finger on it... but you know something more than is being presented is going on...

Yeah... I have been having that feeling lately with R.  He suggested that we meet for dinner with the boys before the ball game tonight.  I was like, "Okay. Whatever.  What time will you guys be here?" and then just as quickly as he suggested it, he took it away.

Again, no skin off my nose either way.

Then later tonight we were trying to figure out this weekend's schedule and he offered again, "How about we meet for lunch before the game?"  I told him I couldn't because I had to drop Colby's little friend off.

I mean R and I are friendly enough... It's just that I got that little weird feeling that you get when something is just not quite right (Trust me I have ignored it many times before) and it makes me worried.

Email ThisBlogThis!Share to TwitterShare to FacebookShare to Pinterest
Labels: the ex

I wish I had a crystal ball

I was presented with something today and I don't know what to do.

You remember a few years back when I was told by my district that they had created a position just for me, but they needed to just jump through the necessary hoops before giving me the job?  And then I didn't get the "made-for-me" job?

Yeah... well, it hurt (needless to say), but in the end, things worked out for the best.
I had an amazing year the following year with an amazing student teacher!  (Which I really needed after my first student teacher experience)  It really re-sparked my fuel for my love for the classroom and I honestly haven't looked back.

I have, however, been working on my Masters and looking forward.  The thing is... I don't know what my future is looking like.  Up until today, it was me continuing in the classroom doing my thing... continuing to have student teachers and share my love of teaching with them. (Yes, I have another one... she started last Monday - so far she is great!)

But now I have been presented with a possibility of another position for me to apply for... and I don't know what to do...

Because, you see, I'm happy where I'm at.  I love the kiddos and love teaching! Also,  I see all of my friends who used to love it too and who that have now moved to district positions wish they were back in the classroom, but the district has put too much into them so they don't really have that option... and I am worried that I would be stuck in that place too.

But I also know this position would be a stepping stone for things bigger and better right in line with my masters...
Ugh!!  Decisions - How I loath thee!!!
Posted by Dawn at 11:42 PM No comments:

Email ThisBlogThis!Share to TwitterShare to FacebookShare to Pinterest
Labels: swirling around in my head, teaching 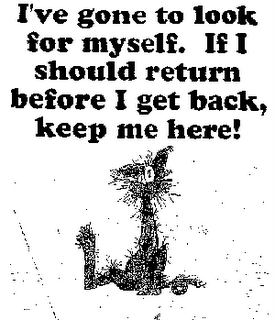 This is the perfect description of me since returning to school here in January.

You see, my student teacher started the first day back - a week ago Monday.
It was great for her because she is so very excited, but for me it meant going in the last couple of days of my break to feel somewhat organized since she wasn't supposed to start until this Monday.

Since then, things have not gone smoothly for me.
I'm sure she thinks I'm a complete and utter dingbat and wonders why they would place her in world of a crazied scatterbrain.

I'm really trying to show her how to be prepared and things to do, but my overfull plate keeps making my "ideal organized example"  a complete and utter mess.  I think today was the first time I didn't have anything go wrong with the lessons, or my copies, or the kids just being ...well, unpredictable kids.

So, if you see me and I look like I've been through the wringer, just smile and help me fix my hair... cause chances are it's crazy like the rest of me.
Posted by Dawn at 10:30 PM No comments:

The fast and slow of it

My relationship with Todd has been fast and slow.
We just seem to get each other... Many times we are thinking the same thing or react at the same time.  Things just seem easy.

Tomorrow is the 4 month mark for us... Yet it feels like a year.

Sometimes I have to remind myself that this is still new.
Tonight was one of those times.

Today was a weird day weather-wise.  It started out icy. Then it was just rainy, but they were predicting more icy weather.

My mom died on icy roads.
I don't normally drive when it is icy... and when I do, it is only out of necessity.

I was talking to Todd earlier in the day telling him how I wasn't sure if I would be getting out.  That several neighbors had posted on Facebook about how there were cars that had slid off.   Todd made a comment about how people around here are just overly dramatic when it comes to winter weather and that from where he is from in Illinois this weather wouldn't stop them.

I tried to explain that once he slid off a road he would change his tune.

Later we were heading out for dinner.  He mentioned that maybe we should drive separate so he could leave straight from the restaurant to get his daughter home and in bed on time. I froze.  Just for a second. The thought of driving on what could possibly be icy roads caught me.  He caught it... Maybe it was subconscious, but he caught it and said, "Nevermind. We'll come back here.  Let's ride together."  I was relieved.

Driving to the restaurant, I asked him how the roads were coming down. He said, "Oh, you know, every few hundred feet we did a doughnut, but nothing that we couldn't handle."

He was joking, but I tensed up.

I felt horrible for the snap of my tongue...

It wasn't his fault.  I have told him that my mom died in a car wreck and that my brother was driving. I haven't gone into all of the details...We have only dated 4 months... and even though it sometimes feels longer, times like this remind me that it is still new and we have a LOT of getting to know each other still.
Posted by Dawn at 11:24 PM 1 comment:

Email ThisBlogThis!Share to TwitterShare to FacebookShare to Pinterest
Labels: dating, No one told me it would be THIS hard, You met WHERE??
Newer Posts Older Posts Home
Subscribe to: Posts (Atom)
I am a mom. I am divorced. I know this life has lots in store for me - I just don't always know what's around the next bend.