Ode to my grandfather

I didn't really realize that I hadn't posted in about a month... Life has been crazy and time seems to be short these days.

My Grandpa Bob (my dad's dad) past away a couple weeks back on September 11. He was 88. He lived in Denver, Colorado and even though he lived so very far away, he was a very intricate part of our family's life. 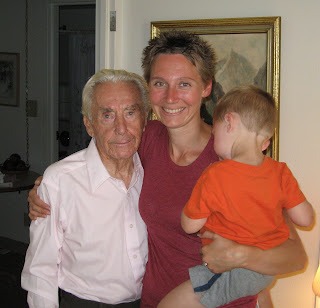 My earliest memory of my grandpa is when he helped to move us here to Missouri after my parents' divorce. I remember he drove his car with a trailer behind. It was a BIG car. (My grandpa always drove big cars - Cadillacs, and the such.) I couldn't wait till he arrived because he had my bike in that trailer and he had promised to take my training wheels off when he arrived to Missouri. You should have seen the smile on my face!! I was so glad to be rid of those stinkin' training wheels that made me bounce from one side to the other.

We spent many summers traveling out west to see my Grandpa Bob. As we all got older though, our trips were (unfortunately) not as frequent. Did that stop my grandpa?? Heavens no! Just 4 years ago, he got in his car and headed here to Missouri and arrived just in time for Colby's 1st birthday. He relished in the fact that he hadn't been in an accident in 30+ years. After riding with him (and being completely white knuckled), I wondered how many accidents he had possibly avoided, yet caused. :)

My grandpa was AMAZING! Until about 2 years ago, he skied the whole ski season from the first fall of snow until the last melted bit every year! He was just in his early 20's when he fought in WWII. . When he left, my aunt was just 2 years old. My Grandma Olga was pregnant with my dad. He didn't get to see my dad until he was almost 2 years old. I can't imagine how hard that must have been! Before he left for the war, his boss begged him not to go because he was the best lineman that he had. (My grandpa worked for SW Bell out of Chicago.) While fighting in the war, my grandpa got shot at. A bullet went straight through his helmet. Luckily, his helmet was sitting high on his head and the bullet didn't even touch him. He later was shot, however, and received a Purple Heart for his bravery. It was said that while under General Patton's command, General Patton asked if any of the men had any questions. My grandpa, being the bold man that he was, said, "Yes, do you really carry a ivory handled pistol with you everywhere you go?" General Patton said, "Yes." and allowed my grandpa to hold it.

While in Denver, I learned many things about my grandpa that I didn't know before. While fighting in WWII, my grandfather's troop liberated a concentration camp and an extermination camp. My grandpa didn't really ever talk about this... I can't imagine what kinds of things he saw, especially at the extermination camp where their main intent was to kill all who entered there. While there, my grandpa took pictures of these camps and I will add the photos when my aunt sends them on to me.

On September 19th, a nice Catholic funeral was held followed by a military burial. My brother's were pallbearers. My brothers and I all made it to the funeral. I know this would have put a smile on my grandpa's face seeing us all together. 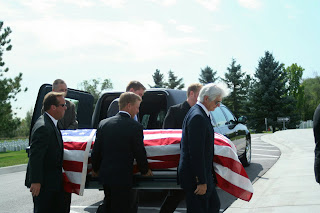 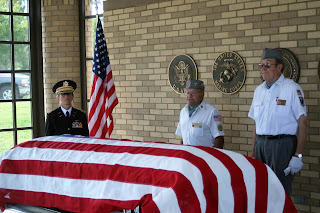 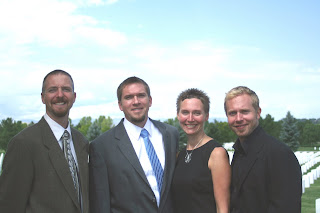 My brothers and I haven't all been in the same place at the same time for 6 years. Can you imagine that?? So, in honor of Grandpa Bob, we made a trip up to the mountains (that he loved so dear) and played in the snow. 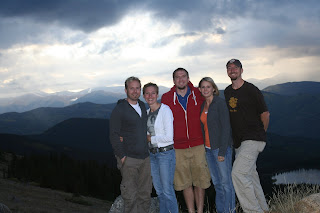 Last night, we were saying prayers and Sam said "Wait!" and then he started listing off peoples' names. He got to 10 people (who I thought he was praying for) and I said "Good! Ten people Sam!"

So, Here is the conversation between my 3 year old son, Sam, and I this Monday morning of my 33rd birthday.

Sam: Mom, today is your birthday?
Me: Yep, it sure is.
Sam:When's everybody comin'?
Me: Nobody's coming Sam.
Sam: It's your birthday?
Me:Yes, it's my birthday.
Sam:When's everybody comin'?
Me: No one is coming Sam. We gotta go to work and school.
Sam: It's your birthday...you know?... blow out candles. 10 people!!!
Me: Yes...I know Son, but when your Momma's age you don't have people come watch you blow out candles.
Sam: No candles... (extremely sad face)
Me: Yes, yes! We will have candles tonight, but just us, nobody else is coming though.
Sam:10 people??
Me: No, no 10 people
Sam: But...it's your birthday????

My poor boy just couldn't imagine that someone could have a birthday and not have a party. It melted my heart!
Posted by Dawn at 7:47 PM 1 comment:

Email ThisBlogThis!Share to TwitterShare to FacebookShare to Pinterest
Newer Posts Older Posts Home
Subscribe to: Posts (Atom)
I am a mom. I am divorced. I know this life has lots in store for me - I just don't always know what's around the next bend.