A night out with the men in my life =PRICELESS 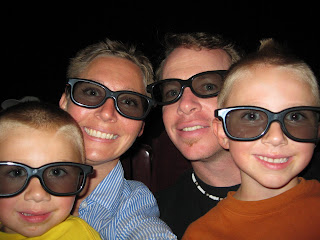 “Joy in looking and comprehending is nature's most beautiful gift.” Albert Eistein

I truly appreciate the world and its beauty. I love to take pictures of these beautiful creations that God has made. Somehow, though, pictures (no matter how well they are taken) don't do justice.
A picture can help you remember. A picture can fill in those forgotten details. But a picture can't make you fully experience it.

Yesterday, I witnessed a beautiful lightning storm, a stunning sun shower, and a complete rainbow.

I have yet to be able to catch lightning on film. I guess that is an incorrect statement...I have never tried to. I get so enthralled by watching a storm roll in and the fingers of lightning reaching from the sky to touch the ground... that by the time I think about it, it's too late.

Sun showers hold a special place in my vastness of memories. I can remember standing in the road in front of my childhood home raising my face to the sun. I love the warmth and calmness the sun brings to me as I stand with my eyes closed and face turned upward. As I stood in the roadway, face turned skyward, rain began. A warm, solid rain. I opened my eyes to see the sun jump and bounce off of the drops that fell around me. Ahhh...what a great memory!
I can't tell you the last time I saw a sun shower...that is until yesterday. I so wanted my boys to have that memory. I took them outside while it was raining with the sun shining. I know that is my memory and they will never have it as their own..but I truly wanted to share that with them!

I have seen several full rainbows before. Their beauty astounds me. I have even seen a double rainbow before. I was in Maui. It was unreal. However, with all the rainbows I have seen, I have never seen the end of one. They always seem to fade away to the vastness of the horizon or never touch the ground. The one yesterday was full, bright and came all the way to the ground right outside my friend's house. The kids all wanted to go get the pot of gold. I laughed at the thought of it actually being a reality. As the rain poured down we kept telling them, "No, no, stay inside." As the rain lightened though, I contemplated the idea. Just as I was about to say, "Hey, go on. See if that pot of gold is actually there!" The rainbow faded and was gone. Guess that leprechaun knew we were onto him! :)

Don't have a single picture from yesterday... Not on film at least. The pictures in my mind's eye are always better though. Guess I'll finger through that album every once in a while when I need a bit of beauty in my day.
Posted by Dawn at 11:58 AM 2 comments:

3. Being with the one I love

2. BIG waves - I mean people can die in the ocean

I LOVE to fly. I had forgotten how MUCH I love to fly. My favorite part is the take off - the engine roaring throwing me back into my seat.

I really should find a job that lets me fly more often. Teaching doesn't allude to flying.

I also enjoy flying because I get to sit in airports. Airports are a great place to people watch. I am completely guilty of people watching everywhere I go. I sometimes get sucked into others' conversations - so much so that I want to comment about their conversation. Some might find this rude...My excuse is that I am interested. Interested in how others think and act.
I headed to Texas this weekend for a quick little get away with Spencer. Originally it was supposed to be a deep sea fishing trip. Due to high waves, that was nixed, but I already had plane tickets. So, I came on.

In Springfield, before we left to our flight to Dallas, the person who checks our tickets came over the intercom and announced, "Folks there is a slight problem with Flight 3770." (groans were heard all around) "The wash room is not working, so if any of you need to ...uh...wash... I suggest you do it now." I giggled as I watched him come up with the correct wording.

My trip to the Dallas airport did NOT disappoint when it came time to people watch. My flight from Dallas to Houston was delayed several times. We were originally supposed to leave at 9:10 and arrive at 10:20. We finally left at 11:00 and arrived at 12:10. Needless to say this pushed some people over the edge.

There was the guy who spoke way too loudly on the phone cussing out a friend for not spending the extra $10 in gas to drive his direction and pick him up in the airport. I mean he "had been in airports all day!" After about 5-10 minutes of repeated f-bombs, his friend agreed. The guy then started jumping up and down punching the air.
(Later this same guy was heard talking on the phone with his mom, no f-bombs were heard.) :)

Then there was the woman who had gotten booted off an earlier flight due to the shortness of her skirt. She was not happy when this one was now delayed. (I guess this is a more common practice than I realized - see this article.)

Then there was the couple who had joined us from the airport bar. I heard they had been seen downing several shots. When the man heard of the first delay, he started shouting and pacing. The woman he was with(who looked like a Swedish blond) tried to control him - though she was way TOO drunk to do so. The stiletto heels didn't help her balance any either. With every delay, this man got louder and louder. The airport policeman came and circled around making his presence known. This gave the me and people I was sitting around something to talk about. We all pulled out our tickets to see what seat row we were sitting on... and hoped and prayed we were no where near this guy's seat.

I kind of felt sorry for the airport crew. They were continually having to be the bearers of bad news. They didn't choose these delays to piss anyone off. They were simply doing their job. Don't get me wrong, I wanted my flight to be on time, but I also knew there was nothing I could do to change the fact.

I truly enjoyed the one airport worker who made light of the fact, despite all the tension going on around her. When she thought the plane was finally landing she said, "Don't go calling anyone yet - type out a text and wait to send it until you are securely on the plane. " and then she smiled.

If I worked at an airport I would have to be that person... cause all that drama is worse than a soap opera and someone has to relieve all that tension.

When we went to board the plane, the loud pissed off guy we found out was seated in row 1. I was glad I was in row 8. I had to chuckle to myself though as I thought about how this guy probably purposefully chose row 1...and this plane boarded from the rear...which means he would be the last one off. :)
Posted by Dawn at 9:04 PM 3 comments:

This morning Sam came padding into my room. It was much too early. Too early. Ha! My son doesn't know the meaning.
Many times he will come tell me he is hungry, I will tell him to give me "just a few more minutes" and he will then go to the living room to watch cartoons to wait. (not patiently, I might add.)
But not this morning. No, this morning, he came up to the side of my bed (I knew he was there, but I didn't open my eyes - you know, hoping for a few more minutes.) and he pulled my eyelid open and said, "Mom...I know you're in there."
I couldn't help but chuckle.
Posted by Dawn at 11:31 PM 3 comments:

Email ThisBlogThis!Share to TwitterShare to FacebookShare to Pinterest
Labels: Laughing keeps me from Crying, parenting
Newer Posts Older Posts Home
Subscribe to: Posts (Atom)
I am a mom. I am divorced. I know this life has lots in store for me - I just don't always know what's around the next bend.