All About MEme Monday:...all that and a flock of birds

Today I decided to join SupahMommy in her quest to mortify honor all of us with horror hilarious stories from our past involving our cars.

Back in high school I was privileged forced to drive a 1980 royal blue Ford Fairmont. We called it the "AirMon" as the F and the T had long since disappeared before I gained the car.

Now mind you... by the time I got the car it was well on it's 4th, or 5th, or 6th driver. It celebrated it's 12th even before I celebrated my 16th...that's NOT saying much when it comes to cars.

Any hoo... My AirMon had all kinds of "special" features to it like:
* The blinkers didn't blink, but the headlights did.
* The defrost fogged up the windows.
* It attracted birds of all species to impale themselves against it.

See... No matter where I drove, I hit at least one bird weekly.
It became a joke amongst me and my friends.

Now. Now. Don't go calling PETA on me...I didn't go after the birds. No. No. They flew right into me.

I always felt bad...but it also kinda made me giggle.

So...Here I was driving down a back country road with one of my besties. We had the windows in the ol' AirMon rolled down and the radio turned up (basically the only thing that really did work in that car.) When suddenly, out of the corner of my eye, I see this whole flock of birds pick up out of a field and take to flight. 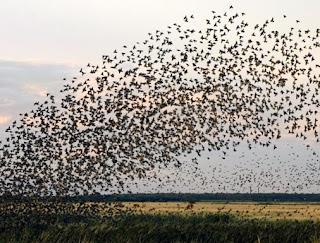 So, you could understand my overwhelming sense of mortification hilarity when I finally stopped the car and bird feathers were swirling around us.

Through my tears of laughter, I answered, "You know that's the sound they always make!"

I know it's morbid, but still to this day it makes me snicker.
Thump. *hehehe*