If we thought rain was bad enough, we didn't know what we had coming.
Yesterday, we decided to travel from Deal's Gap to Germantown, TN (right outside of Memphis). When we stopped to put on our rain gear (again!), we were told by locals that we were under a tornado warning.
We watched the local weather channel and decided that by the time we arrived at Germantown the threat would be past. We were right...just barely. We missed a tornado touching down in Germantown by about 30 minutes. The hotel we planned to stay in had no power. There were stores with smashed windows, street lights down, and lots and lots of confusion!
Our hotel sent us to another hotel about 8 miles down the road that still had power. The only problem was we received horrible directions and drove around what seemed like forever trying to find it. (Not something you want to do when you are wet and tired.)

By the time we checked in, all we wanted was a hot shower and something to eat. We ordered in Asian. When it arrived, NO utensils. Chopsticks? nada. Forks? nope. When we called, we were told, "Oh, you have to request those when you order." What??!! Since when do you have to request eating utensils with take-out?

The next morning, we got up, ate the continental breakfast, and made a quick stop in the hotel's hot tub. We headed back upstairs and started to pack. Spencer had gone down to the bike to move it around to the front. Then all of a sudden, the fire alarms were going off. I stepped out into the hall. A cleaning lady was there going on with business as normal. "Is this real?" I asked. "Nah. Our dryers set the alarm off all the time. Just ignore it." Okay. So I went back to packing. Two minutes later, a manager was banging on all the doors. "This is real! Get out!!Get out of the Hotel!!" she screamed.

Now instead of leaving and getting on the road early, we sat outside our hotel watching smoke billow out of the laundry room door. Unfortunately, I didn't grab my camera when I raced out of the hotel room. So... all you get is the last fire truck leaving. 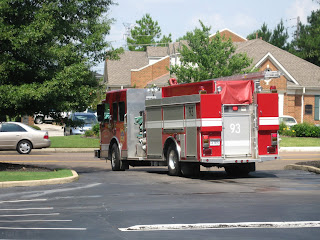