My son, Sam, has had these raised bumps on his belly for months. 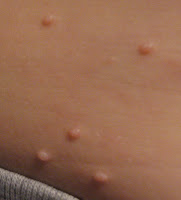 We had taken him to our family doctor several times and she didn't seem to know what it was. In January, we took him to a dermatologist. The dermatologist seemed kind of concerned with the fact that we had waited so long to get them checked out (which we hadn't). She said that it could take up to a year to completely heal him of them. I don't know what she called it, but she prescribed him a cream that without my insurance would have been $600 (Yikes!), but with it, it was just $35. The cream basically burned off the bumps and made bleeding open sores on him. 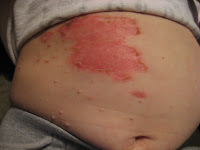 I have had mixed feelings on putting the cream on him, because it is causing him such pain. His skin is now starting to be blotchy around those areas. I am afraid it might be an allergic reaction to the cream. So we have set up a new dermatologist appointment at the beginning of April (earliest we could get it).
It is a confusing situation to me as I want Sam well, but I don't want to make him sick in order to get him well.
Posted by Dawn at 9:08 PM

Email ThisBlogThis!Share to TwitterShare to FacebookShare to Pinterest
Labels: Doctor Me Up, parenting